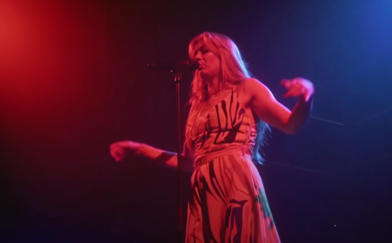 The music video for “My Heart Goes (La Di Da)” ft. Topic, features footage of Becky Hill performing live both at festivals such as Reading & Leeds and Camp Bestival (which she headlined) over the summer and on her sold-out UK & Ireland tour this Autumn.

“My Heart Goes (La Di Da)” is lifted from Becky’s recently released Top 10 debut studio album Only Honest On The Weekend. It follows Becky’s Top 3 hit “Remember” which is now certified Gold and has been streamed globally over 154 million times, “Better Off Without You” ft. Shift K3Y, (which is Certified Platinum after accumulating over 600,000 sales), “Heaven On My Mind”, (which has accumulated over 133 Million streams globally, and is now certified Gold), and her Spring ‘21 Top 40 hit, “Last Time”.

Becky is currently on the road, mid-way through her sold-out headline UK & Ireland tour. See below for details of all the dates/shows.

With an irrefutable aptitude for writing chart smashing pop songs and a reputation as a pioneer in the electronic music scene, Becky Hill is one of Britain’s most in-demand musical exports of the moment. She has over 180 songs registered with ASCAP – no mean feat considering only 17% of PRS for Music’s registered songwriters are female – and an impressive string of hits to her name. Having written and performed on thirteen singles which charted in the top 40 of the UK Official Singles Chart, (including three top 10 singles, one number 1 and nine platinum records), Becky has now amassed over 2 billion streams on Spotify alone. She has over 17 million monthly listeners on Spotify after being crowned the 2nd most-streamed British Female Solo Artist on Spotify UK in both 2019 and 2020.