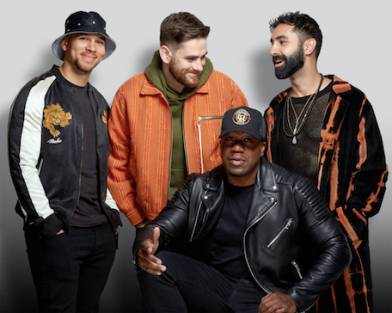 Brit Award and MOBO Award winners Rudimental will be feeling the love at the NFL London Games this weekend when they perform the halftime show at Tottenham Hotspur Stadium on Sunday (October 17).

The drum and bass band, who scored a UK number one with “Feel The Love”, will perform from a specially-constructed stage during the game between the Miami Dolphins and Jacksonville Jaguars (kickoff 2:30 p.m. UK). The game is the second this year to be staged at Tottenham Hotspur’s state-of-the-art stadium, which was purpose-built to host NFL games.

As well as their breakthrough 2012 chart-topper, other hits such as “Waiting All Night”, “Remember Their Names” and their collaboration with Jess Glynn, Dan Caplen and Macklemore, “These Days”, will feature in their set on Sunday.

As part of the pregame ceremonies, members of the UK and US and military, Veteran Lance Corporal Maurillia Simpson and Staff Sergeant Denver Murphy, will be performing their respective national anthems

The Jaguars-Dolphins game will air live on BBC Two and BBC iPlayer in the UK, as well as NFL Game Pass, with highlights on Sky Sports NFL. CBS will broadcast the game live in the US.