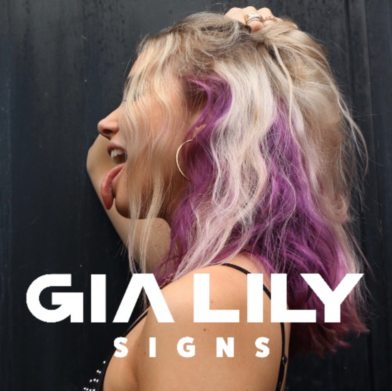 22-year-old newcomer Gia Lily has inspired a passionate and ever-growing fanbase by writing songs and collaborating with fans via TikTok.

That personal touch, boosted by piano tutorials and a bright, engaging personality, resulted in a phenomenal reaction. She has already generated 5.8 million likes on TikTok alone, creating a natural buzz for her career as a solo artist which commences today with the release of her debut single ‘Signs’.

With ‘Signs’, Gia has delivered a moment of break-up pop perfection that lives up to the expectations of her followers. Fixating on the pains and very specific personal experiences that comes with heartbreak, ‘Signs’ is moody and melancholic. And yet Gia’s expressive, enticing vocal is also infused with the feeling that what hurts now is an experience to learn and grow from.

Gia says, “‘Signs’ is about hoping your ex picks up on the signs you’re trying to send them. They’re with someone new, but you know he’s still caught up on you as well. I wanted to turn that feeling of pain and heartache into something that can be used as a form of empowerment.”

‘Signs’ presents a first taste of what to expect from Gia in 2022, with more releases and the launch of her live show set to follow. The London-based artist is inspired by visionary and empowering artists such as Charli XCX and Gwen Stefani. In recent months, she has also collaborated with hitmakers including Lewis Gardiner (Megan Thee Stallion, Ellie Goulding), Jonathan Quarmby (James Arthur, Tom Walker) and Leo Stannard (KC Lights, CamelPhat).

While music is Gia’s prime passion, she is also an actress and model. She featured in ‘Cognition’ alongside Andrew Scottand Jeremy Irvine and stars in the upcoming Sci-fi feature film ‘Light’.