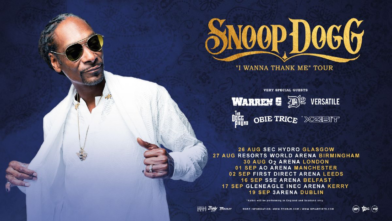 Snoop Dogg has announced rescheduled dates for his ‘I Wanna Thank Me’ UK and Ireland arena headline tour for August and September 2022.

About moving the tour Snoop says, “My biggest priority is to keep my team and my fans safe, due to ongoing issues with the pandemic we have to push back again to make sure we can go to every country on the tour in a safe way. IT’S GOIN DOWN NEXT YEAR!”

The forthcoming tour is in support of the West Coast rap legend’s 17th album I Wanna Thank Me and a documentary of the same name. The album release and documentary celebrated 25 years of Snoop Dogg, a career that has seen the Doggfather cement his undisputed influence on music with chart-topping, multi-platinum records, while also solidifying his importance to wider culture as an actor, businessman and more across the board.

The tour reflects this and sees Snoop Dogg enlist a selection of his key collaborators from the breadth of his iconic music career including further West Coast hip hop royalty; Warren G, Tha Dogg Pound, Obie Trice and D12. They will also be joined by the multi-million streamed Irish rap duo Versatile.

Snoop Dogg collaborator and platinum-selling rapper Xzibit has now also been announced to join the tour for the dates in Scotland and England.

Tickets are on sale now here. Full tour dates can be found below: