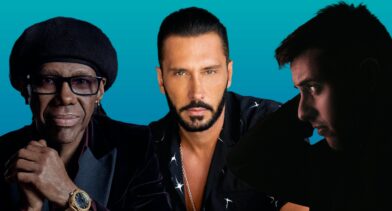 Sometimes the best things in life happen in entirely unexpected ways. When Cedric Gervais collaborated with Franklin, you already had an intriguing proposition. Gervais is a global icon of the house music scene with a Grammy Award to his credit for his remix of Lana Del Rey’s ‘Summertime Sadness’ as well as 3.5 million monthly listeners at Spotify.

Meanwhile, Franklin is a multifaceted one to watch, having remixed Mabel, James Arthur and AJ Mitchell, topped the UK Dance Chart and collaborated on Karen Harding x Digital Farm Animals, which was highlighted as Radio 1’s Tune of the Weekend. Cedric discovered Franklin’s early remixes and work with Digital Farm Animals, and reached out to collaborate with one of the scene’s most exciting new underground talents.

Among music legends, Nile Rodgers is truly exceptional. He amplifies his legacy as a composer, producer, arranger and guitarist by constantly traversing new musical terrain and successfully expanding the boundaries of popular music. As the co-founder of CHIC and the Chairman of the Songwriters Hall of Fame, Rodgers pioneered a musical language that generated chart-topping hits like “Le Freak,” (the biggest selling single in the history of Atlantic Records) and sparked the advent of hip-hop with “Good Times”. Nile’s work in the CHIC Organization and his productions for artists like David Bowie, Diana Ross, and Madonna have sold over 500 million albums and 75 million singles worldwide.

When the two producers planned to create something truly uplifting, they thought back to their earliest influences, and particularly to the artists who have that rare ability to take you somewhere else during the course of a track. They both gravitated to one band in particular: CHIC. They deployed sparkling pop synths and modernist house production to give ‘Everybody Dance’ a fresh energy without losing the essence of what made it a stone-cold classic.

Back in 2016, Gervais had remixed the Sigala track ‘Give Me Your Love’, which featured Nile Rodgers. It had been warmly received, and Gervais took the opportunity to send his version of ‘Everybody Dance’ to the man who co-wrote it with his late bandmate Bernard Edwards.

Nile Rodgers loved it. And to help the track make the biggest impact possible, he re-recorded his funk-fuelled guitar parts and sent them back to Gervais and Franklin to create the new version of the track that you hear today. The result is a beacon of positivity: a track that provides a moment of joyous celebration to help bring people together at the end of a bleak year.

“I heard about Franklin after working with Digital Farm Animals on our single Touch The Sky. He’s a young, exciting producer and we both shared the same idea about the original sample from Chic ‘Everybody dance’ .. we went back and forth remotely and when it felt really good we were able to get the record to Niles. We just wanted his approval but he loved it so much that he said he wanted to replay the guitars and be part of the project. Its such fun record!” – Cedric Gervais

“For me, everybody dance was always so instantly recognisable when you heard that Bernard Edwards bass riff. From there onwards, it’s just such a feel-good, dance floor anthem. I just couldn’t resist trying to reimagine the song in a more contemporary dance-crossover setting. When I heard Nile not only loved it but actually wanted to cut the guitars down himself, I genuinely didn’t believe it, I still can’t even believe it now!!” – Franklin

“Everybody Dance was the first song I wrote. More than 40 years later it still gets played thousands of times a day around the world and it still makes everybody dance. I love that Cedric and Franklin wanted to remake it while staying true to the CHIC spirit that Bernard and I put into everything we did together. I was therefore really happy to play and produce on it and bring it to a new generation of dancers.” – Nile Rodgers