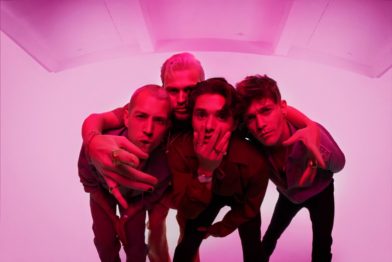 The Vamps today announce The Cherry Blossom Tour for 2021. The shows will see The Vamps perform songs from their brand new upcoming album ‘Cherry Blossom’, due for release on October 16th, alongside a selection of their greatest hits.

Fans can get access to pre-sale tickets for the tour by pre-ordering the forthcoming new album ‘Cherry Blossom’ on any format from the UK official store -https://TheVamps.lnk.to/UKSt0re. Orders need to be placed before 9am on Monday 5th October (BST) to be eligible for pre-sale access.

The tour dates announced today are:

More tour dates around the world will be added next year.

The Vamps have chosen to partner with Help Refugees/Choose Love. 10% of the profits from VIP tickets sales will go to the organisation (subject to VAT).

Help Refugees started as nothing more than a hashtag. Devastated by images of thousands of families arriving on European shores to be met with barbed wire, borders and batons, a group of friends used #helprefugees to organise a van full of donations in August 2015. Within a week, they had raised £56,000 and were soon receiving 7,000 items every day. Fast forward four years and they have reached over one million displaced people, worked with over 35,000 volunteers and currently support over 120 projects across Europe, the Middle East and the US-Mexico border. Choose Love is a huge, unstoppable movement of people who believe in a better world.