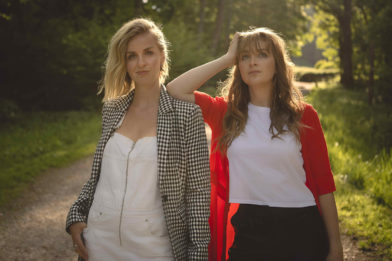 Following the release of the infectious ‘Meant To Be Me’, Ward Thomas have today released the captivating tour de force that is new track ‘Someday’. It paves the way for their highly anticipated forthcoming album, ‘Invitation’, which will be released on October 9th on WTW Music / eastwest.

Drenched in beautiful strings and showcasing one of their strongest vocal performances to date, ‘Someday’ is a wistfully romantic plea to a lover to take things slow. On the track the girls commented, “This song is about a long-distance relationship. It’s about the constant desire to keep things going as both parties are keen on each other and feel a bond and connection but geography and having completely different lives and lifestyles is getting in the way.” They continued, “But maybe someday in the future everything will come together and the relationship will work out.”

To celebrate the release of Invitation the girls will globally live stream an exclusive concert filmed this summer at London’s historic Theatre Royal Haymarket on Saturday 10th October. Tickets on sale HERE.

The concert will be streamed live on 10th October across the following time zones:

(NB: Live stream in Australia / Asia ten to occur on the following day)

Largely produced by Jonathan Quarmby (Lewis Capaldi, Tom Walker, Finley Quaye), and mostly recorded in lockdown from their Hampshire cottage, ’Invitation’ is a coaxing doorway for all into an exciting new chapter as the fog of a global pandemic begins to lift. There’s palpable energy, and many of its songs benefit from a coming of age for sisters Catherine and Lizzy and a new found voice sees them diversify their sound.

Lockdown may have forced Ward Thomas to finish Invitation in isolation, but it was always intended to have a homespun vibe. For the first time since making their debut while still at school, for their most personal album yet, Catherine and Lizzy went DIY. Invitation will be distributed by East West, their new major label home, but it was written and recorded entirely independently, with every decision taken by the duo. The pair’s imminent move from the rented cottage they’ve shared for the past few years, where so many songs have been written over countless cups of tea, to their own respective homes fuelled the positivity that flows from Invitation.

“When it came to doing new photos for press and artwork – or making videos – we did it independently. If we couldn’t do something ourselves or with help from our friends we just left it,” says Lizzy. “It’s our new attitude. Don’t stress because the world right now is tough enough. Just do your best and be kind and always look for the positives in life.”

“Natural and organic,” says Catherine, butting back in. “Just like the album.”

The girls will embark on an intimate “Invitation” acoustic tour, which was rescheduled due to Covid-19, for April next year. The 16-date run will include two dates at London’s Union Chapel on the 26th & 27th.

2020 may have been a year of global ups and downs so far, but as one door closes, another opens. Enter an exciting new chapter for Catherine and Lizzy Ward Thomas.