Fearne Cotton to release a series of albums under ‘Happy Place’ 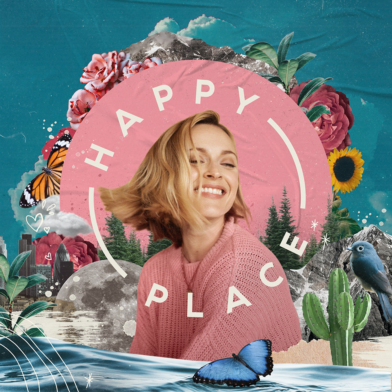 Decca Records have announced a partnership with Fearne Cotton to release a series of dynamic and diverse albums under ‘Happy Place’.
The project will see Fearne curate an album for the very first time as Executive Producer. ‘Happy Place’ will feature original songs with a blissful narrative, written and recorded by a collection of inspirational artists and friends.
Due for release on 30th October, the album features an array of incredibly talented artists across a number of genres, ranging from internationally known to discovered independent talent, each with their own meaningful stories. Emeli Sande, Sam Fender, Ludovico Einaudi, Billie Marten, Amahla, Tommy Ashby, Larry Pink The Human, Luke Sital Singh, Ryan Lewis, Geejay, Kye Sones, Amelia Warner and Stephan Moccio, have all contributed unique songs, that focus conversation and communication around mental health and well-being.

The first release from the album ‘Lockdown Kittens Dancing’ is co-written by Fearne herself with GABA, with music from Amelia Warner and narrated by Dame Helen Mirren.

Fearne says: “Mental health and music have always been linked. It might not be immediately recognisable but music has the potency and power to help us work through difficult emotions, understand ourselves a little better and release unlocked feelings that have been suppressed. I have personally always used music to cathartically work through tough patches or to boost me when there is heaviness present.
I really hope this album envelopes the listener in support as each musician/artist has poured a little of their own emotion and experience into each song. Some of the tracks may elevate emotions to move through a low, others may offer up solace as lyrics resonate and melodies create movement & enjoyment.

I feel incredibly lucky to have worked with such a pool of talent during the making of this album. As a massive music fan it really is a dream come true to work with some of my favourite artists in marrying my passion for music and interest in mental health. This album will soothe on a stressful day and is a great soundtrack for meditation. It was made with 100% love.”

Fearne has a history interwoven with music at its heart, with radio career spanning across both BBC Radio 1 and BBC Radio 2, hosting legendary music TV shows such as Top of the Pops, and most recently hosting a 90’s music podcast for BBC Radio 2.
Her ‘Happy Place’ well-being brand was born as a destination to create happiness & joy in the everyday. A safe space where differences are celebrated, the extraordinary is discovered and kindness dwells at its core. Happy Place engages a community of 10.5 Million on social media, a frank and honest No.1 Podcast with over 30 million downloads, an emerging festival brand with over 12,000 attendees in it’s first year and a range of award winning ‘Sunday Times Best Seller’ books that have sold over a million copies in 12 different languages across the world.

As a global community we find ourselves in a time of change and disruption, an ever evolving, contributing factor to our mental health. The psychological effects of music have been proven to be powerful and wide ranging. Music can create a safe space, within which to forge connections both with ourselves and those around us. An integral tool to help cope with stress, feel less alone, find release, joy and emotional peace.

A series of podcast interviews with Fearne and artists featured on the album will also be released to support the campaign. In keeping with the conscious brand values, the album will be produced completely plastic-free with cardboard packaging and eco vinyl.