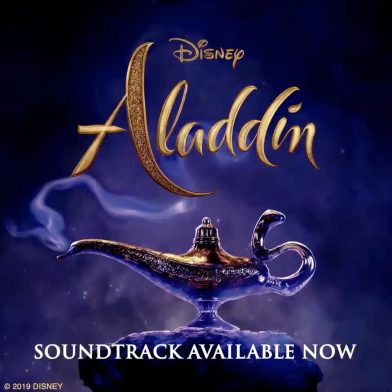 It was great to see that the original and popular songs by Alan Menken and Howard Ashman in the 1992 original were included in the 2019 remake, but with a newer twist.

Some songs were changed, enhanced, or adapted to give them a fresh or more authentic Arabian sound. Plus, the addition of some original songs were also very welcome. Here are some of the tracks featured in the film:

Arabian Nights – Will Smith
This really sets the scene and introduces the audience to the wonderful world of Agrabah. You can practically smell the aroma of the street markets and bazaars. Compared to the older version, this newer version uses traditional percussion instruments which gives it more of a mystical vibe.

One Jump Ahead – Mena Massoud
The intro to this is very middle Eastern, and whilst it’s very familiar to the original, it has more of an adventurous rhythm and sound, with Mena Massoud carrying the song really well.

Friend Like Me
Although I will always love the classic version of this song, Will Smith’s version of ‘Friend like me’ has been given a ‘Fresh Prince’ style make over with a contemporary hip-hop twist. I like this version as it’s fun, modern, and puts you in a great mood. You can really hear the live orchestra and live saxophones incorporated in there too. If you like this version, you should check out the remix that features on the end credits that features DJ Khalid too.

A Whole New World
You can’t have an updated Aladdin movie without ‘A Whole New World’ in it, and Mena Massoud and Naomi Scott really complement one another. I love how the song remained virtually untouched and was reminiscent of the original song.

Speechless
Brand new for 2019 is power ballad, Speechless. Naomi Scott sings this beautifully with such force and emotion. This song is Princess Jasmine’s declaration that she won’t stay silent, or be pushed aside, and will do what’s right for herself and the people of Agrabah. This is not the typical passive princess that we are used to seeing on screen, and I applaud this extra song and this strong female presence.