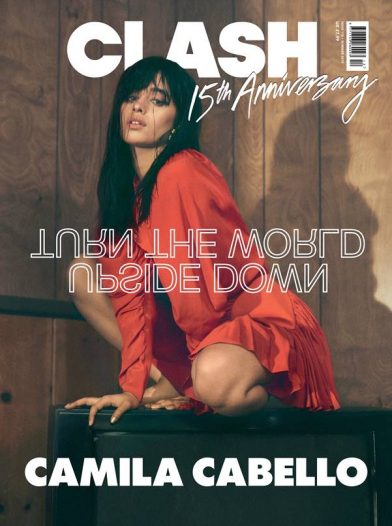 The 22-year-old ‘Senorita’ singer looks phenomenal on the cover of the latest issue of Clash magazine for their summer 2019 issue.

Cabello stuns in a red Mugler outfit and Moschino earrings, and shared her thoughts on personal growth, finding normality and how Social Media affects her creative process.

On social media vs. the creative process Camila says:

“I just want to be coming from such a pure state, and I feel like going on social media and seeing opinions – even if they’re good ones; people’s opinions comparing yourself to other people – I really think that it affects the creative process. I feel like it’s necessary to just be as human as you can all the time, but especially keeping it pure for the writing process.”

She also spoke about her personal growth since her debut:

“Since that album I’ve fallen in love and I’ve experienced life – I feel so much more alive now, and I don’t feel scared anymore. I think that on a personal level I was just scared: I was scared of going out and meeting people, going on dates and this and that, and I kinda was very sheltered in my own little bubble, and since I’ve broken that bubble, it’s kinda like a never-ending place to pull from because it’s all coming from a real place.”

On leading a normal life:

“You see pictures of me in LA and sometimes I just look like trash because I didn’t know that there was going to be paparazzi there. I don’t dress for that all the time. I’m just like, ‘Oh, I’m just gonna go around the corner,’ and then I’ll see the picture on the Internet, and I’ll be like, ‘Shit!’ But it’s just because I can’t – I can’t be in heels and do two hours of glam every day just in case there’s a picture of me. That’s just not a sacrifice I’m willing to make.”