We all know the epic tale of Disney’s Aladdin, but just in case, I’ll catch you up anyway…

Orphaned “street rat” Aladdin, played by Mena Massoud, has to steal in order to survive on the streets of Agrabah. He and his lovable, but often mischievous monkey side- kick, Abu, cross paths with a beautiful girl in the bustling marketplace, who gets herself into trouble.

Despite Aladdin facing difficult circumstances of his own, he steps in to save the day, and establishes his role as the good guy with a heart of gold – a diamond in the rough. The two bond, and we quickly realise that this is no ordinary girl. She is Princess Jasmine, the daughter of the Sultan, who is equally as brave and can take care of herself, but Aladdin is not aware of this just yet.

We are then introduced to Jafar, the vizier to the Sultan, who secretly wants power over Agrabah and will stop at nothing to get it. The mystical ‘Cave of Wonders’ holds the key to Jafar’s scheme, as inside, there’s a magic lamp that contains a genie who grants wishes. However, not everyone can enter the cave of wonders, as only a person who is worthy can enter. Jafar realises that Aladdin is the only person who can get him the lamp, so he offers him multiple rewards and riches in exchange for him to acquire the magic lamp. 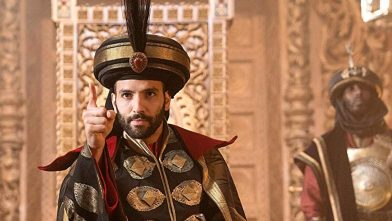 For a poor young man without any prospects, this is a dream come true for Aladdin, so he agrees. One stipulation though – the lamp is the only item in the Cave of Wonders that can be touched. If any other treasures are swiped, then Aladdin will fall to his doom. Aladdin and Abu then embark on their quest to fetch the lamp for Jafar. Aladdin does indeed find the lamp, unfortunately, Abu cannot help himself, and picks up a sparkling ruby, and the Cave of Wonders starts to crumble around them.

Jafar panics and promises to save Aladdin’s life at the edge of the cave if he gives him the lamp. Aladdin hands Jafar the lamp, but Jafar pushes him back into the cave. Suddenly, the magic carpet appears and saves Aladdin and Abu. Abu, as much as a liability as he seems, his antics prove to be very useful, as he stole the lamp back from Jafar without him noticing.

Aladdin then rubs the lamp and is shocked to see a magnificent genie appear, who is played by Will Smith. The Genie then explains to Aladdin that he will grant him 3 wishes.

What will Aladdin do with these wishes?
Most of you all know what happens next, so I won’t re-tell the entire story, but for those of you that don’t know, where have you been hiding – in the Cave of Wonders?!

If you love romance, adventure, and faraway lands, this is definitely the movie to go and see. While the original 1992 version of Disney’s Aladdin was very much loved by a generation, Guy Richie’s adaptation is lively, colourful and fun.

The cinematography was magical, beautiful, and simply breath-taking. Ritchie managed to keep many of the original elements from the 1992 version, yet provided the audience with fresh new twists, such as a sub-plot for the genie where he gains a love interest, a new song for Princess Jasmine, and a few original scenes, like the hilarious exchange where Aladdin and the Genie try to win Princess Jasmine over with gifts, jam in particular.

I found Mena Massoud to be very charismatic and likeable. He captured the essence of Aladdin perfectly with his almost Disney drawn like appearance, and heroic, yet sometimes awkward, but very charming ‘diamond in the rough’ moments. Naomi Scott was exquisite, not just in her beauty, but in the way she brought strength and power into the character, something many modern women aspire to be like. 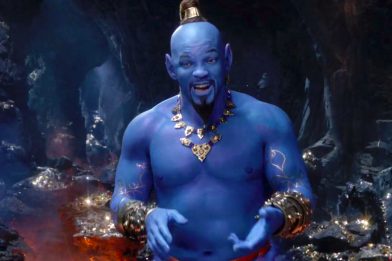 Last but not least, I must talk about Will Smith portraying the Genie. I have always been a fan of Will, but I was initially worried about him stepping into the iconic role portrayed by Robin Williams.

To Smith’s credit, it must have been tough to try and ‘fill’ Robin Williams shoes. However, I feel that Will Smith was the perfect choice for this version of Aladdin. Both he and Robin Williams are very different people, so to bring someone in who is just as likeable, who could make the role his own, was a very smart choice.

Smith definitely did the character justice, and really made the Genie his own, bringing his own ‘Big Willie Style’ persona and stamp into the role. For me, this didn’t take anything away from Robin Williams, and I think he would have been very proud of Smith’s performance.