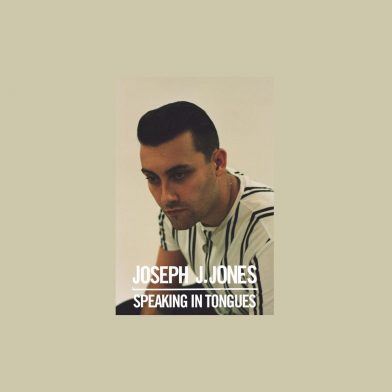 Ahead of his upcoming UK and European tour, which includes a date at London’s Oslo, this eagerly-anticipated new single see’s Joseph continue to cement his reputation as one of 2018’s most important breakout artists.

Set to beating drums, layered with his trademark vocal and an instantly memorable hook, ‘Speaking In Tongues’ explores the notion of trials and tribulations of a relationship on the brink.

The emotive track is yet another example of Joseph’s beautifully refined storytelling ability.

There’s something truly unique about Joseph J. Jones. Having spent his formative years following in his father’s footsteps, taking up boxing and performing in East End football pubs – Joseph was always fated to fight his way to stardom.

Since arriving on the scene, Joseph has received support from BBC Radio 1 & 2, BBC 1Xtra, Radio X and Virgin Radio, with an incredible run of singles ‘Crawl’ and ‘Gospel Truth’, and has performed to thousands at Citadel, Haldern Pop and Reeperbahn festivals.

The upcoming tour will mark a meteoric twelve months for the twenty-six year old Brit who has toured relentlessly with his hypnotic pop songs and magnetic vocals.

The eight-date UK run will kick off with a show in Glasgow on 5th March, and concludes on 15th March at London’s Oslo, before Joseph embarks on another spate of dates across Europe in May.

This year is already gearing up to be an exciting one for Joseph, he’s currently working hard on his debut album and looking ahead to unleashing his distinctive raw emotive sound on as many people as possible.