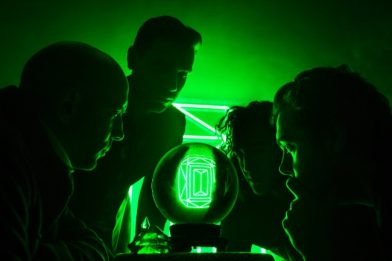 listen to the track here:

Lord Huron – Wait by the River

The band’s forthcoming album is out April 20th on Whispering Pines/Republic Records.

To promote the upcoming release, Lord Huron will make their way to the UK in October, playing five shows across the country including a night at London’s Roundhouse.

Vide Noir was written and recorded over the past two years at Lord Huron’s Los Angeles studio and informal clubhouse, Whispering Pines, and was mixed by Dave Fridmann (The Flaming Lips/MGMT).

As a true multi-media artist, Schneider has once again created an adorned world to inhabit within Vide Noir: the album will be accompanied by a wealth of imagery, films and immersive experiences crafted to expand upon its narratives and themes.

This builds on Schneider’s past work, which used videos, a comic book, a choose-your- own-adventure hotline and assorted Easter eggs as means of deepening the listener experience.

Watch the trailer for Vide Noir :