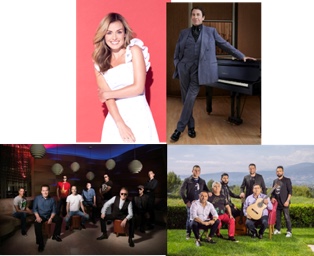 Boundless and Neil O’Brien Entertainment are proud to announce details of their inaugural summer festival, A Boundless Summer, which will take place in Borde Hill Garden, Haywards Heath on 7th and 8th July 2018, and Bowood House, Wiltshire on 21st and 22nd July 2018.

Set to become a summer highlight this year’s eclectic mix of headline acts are UB40 (plus support ASWAD) and The Gipsy Kings featuring Nicolas Reyes & Tonnino Baliardo, who will take to the stage at Borde Hill Garden on 7th and 8th July respectively.

The weekend will close with Boundless Summer Proms with Katherine Jenkins with The National Symphony Orchestra and special guest John Owen-Jones and conductor Anthony Inglis.

Boundless is a club dedicated to civil-service and public-sector workers – active and retired – looking to get more out of life for less.

Members pay a small fee per year, and are given access to exclusive days out, holidays, ideas and offers.

A Boundless Summer, the company’s inaugural festival, is being opened up to the general public, who, for the first time, also have the option to join Boundless upon buying tickets, giving them access to the exclusive deals on offer year-round.

Tickets priced at only £30 for A Boundless Summer go on sale on Friday 23rd February at 9AM, and can be purchased at www.boundlesssummer.co.uk