Demi Lovato announces 2018 European ‘Tell Me You Love Me’ tour 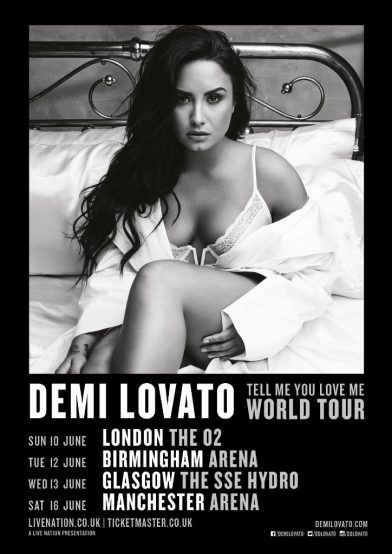 Demi Lovato today announces her European tour. Produced by Live Nation, the 14-city European run will begin on May 28 in Antwerp, Belgium and wrap on June 27 in Bologna, Italy.

In July 2017, Lovato released the first single “Sorry Not Sorry” off her album which instantly flew into the Top 5 on the iTunes Charts and is now certified double-platinum. The hit has garnered over 500 million streams, climbed to #1 on the viral charts, and has over 290 million views for its house party video. Lovato’s sixth studio album “Tell Me You Love Me” debuted at #1 on iTunes in 37 countries on September 29th.

In addition to her critically hailed album release, Demi released a 78-minute documentary film, Simply Complicated which has amassed over 13 million views to date. Demi has also already announced she will embark on a 20-city tour across the U.S. and Canada with DJ Khaled and Kehlani, starting on February 26.

Fans who have pre-ordered ‘Tell Me You Love Me’ will have access to purchase presale tickets beginning Wednesday February 14th at 9am local time through until onsale. For complete presale details visithttps://store.universalmusic.com/demilovato/.

Tickets for Demi Lovato’s Tell Me You Love Me tour go on-sale to the general public beginning Friday February 16 at 9am local time at http://livenation.co.uk