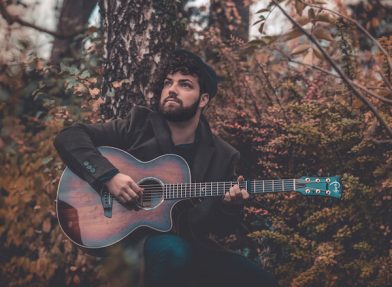 From Aberdare, South Wales, John Adams grew up in the same area as the Stereophonics, and draws influences from the likes of James Morrison, Sam Smith, David Gray and James Blunt.

With emotive and heartfelt narratives woven together as stories, his expressive and nuanced vocals contrast to the drawn out, atmospheric piano accompaniments.

The voice is certainly the focus here, and he earns the undivided attention of the listener by addressing them directly, taking them on a musical version of journeys he has experienced internally.

But whilst this style of songwriting is to an extent standard practice, the instrumentation and production mark him out from the crowd: there is a distinct individuality to Adams’ music.

The piano is a central instrumental focus and yet there is also a wide variety of sounds, including electronic keys and sampled drum patches.

A good example of this is the opening track, Coming Home. Of course the occasional electric guitar and more conventional supporting band sound can be heard, but it is clear that he is making a concerted effort to define himself in his own terms.

This faithfulness to personal story is mirrored in how he came into the musical world, and continues to progress as a musician.

A truly homegrown talent, he began his career busking on the streets, using the money to pay for his first release, fittingly entitled The Pavement is My Stage.

Since then, Adams’ popularity has blossomed, and 2017 saw him play around 200 gigs, a UK tour with several sold out dates, and several live sessions on BBC Radio Wales.

In fact, it could be said he has edged closer to his personal musical ideal in You Never Know Who’s Listening. It is audible how much more comfortable he has become, molding the musical soundscape to his taste and responding to it with his singing.