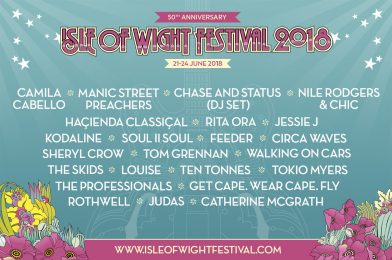 They join headliners Depeche Mode, The Killers, Kasabian, Liam Gallagher as well as The Script, Van Morrison, James Bay and Blossoms who will also be playing across the weekend.

In honour of the festival’s ‘Golden Jubilee’, all attendees are invited on Saturday 23rd June to adorn themselves in gold for a weekend of fun and celebration. Expect to see sparkling divas, shining stars and victorious gladiators come together for this year’s 50th anniversary.

Manic Street Preachers emerged in 1991 and have since released 12 studio albums, which include ‘This Is My Truth Tell Me Yours’, ‘Everything Must Go’ and ‘Generation Terrorists’. The band have recently announced their 13th studio album ‘Resistance is Futile’, out April 13th.

Chase and Status (Will Kennard, Saul Milton and MC Rage) are one of the most successful British bands of the past decade. They have released four studio albums to date including the ground-breaking debut ‘More Than A Lot’ and double platinum-selling sophomore ‘No More Idols’. Third album ‘Brand New Machine’ debuted at no. 2 in the album charts and was followed by last year’s top ten album ‘Tribe’.

Sonic innovators Nile Rodgers and CHIC will wow crowds with renditions of iconic party anthems such as ‘Le Freak’, ‘Good Times’ and ‘Everybody Dance’. Nile’s work with the CHIC Organization and his productions for artists like David Bowie and Madonna have sold over 200 million albums and 50 million singles worldwide.

Playing to some 200,000 people in some 30 concerts in the past two years by the time they reach the Isle Of Wight, the widely acclaimed Haçienda Classiçal sees the club’s original DJ partnership, Graeme Park and Mike Pickering reinterpret seminal dance classics from the hugely influential Manchester club with the city’s Manchester Camerata orchestra.