Kicking off in Tulsa, Oklahoma on 2nd May, the European tour will begin in Berlin on 31st August for a string of European dates to include Cologne, Paris, Madrid, Copenhagen, Hamburg, Amsterdam and Milan, as well as Manchester on 19th October and London on 23rd October.

In addition, special home shows are being planned for Dublin and Belfast, details of which will be announced as soon as they are finalised.

U2 – You’re The Best Thing About Me (Official Video)

The official music video for You’re The Best Thing About Me by U2.The video, directed by Jonas Åkerlund, sees the members of U2 revelling in the sights and s…

As with every U2 tour, this new arena production will explore the latest in cutting-edge technology,featuring multiple performance areas, a state-of-the-art sound system, plus an all new super high-res LED screen.

Tickets for the U2 eXPERIENCE + iNNOCENCE European Tour will go on sale beginning Friday 26th January and there will be a public ticket limit of 4 tickets per person.

The tour will also visit Dublin and Belfast. Dates, venue and on-sale details to be announced soon. 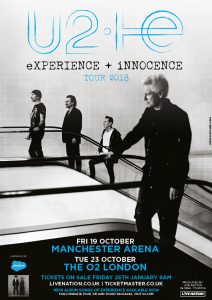