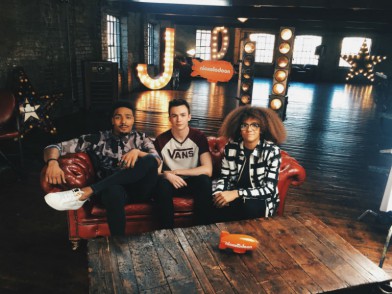 Jordan Banjo and Perri Kiely announced today in an Instagram video that they will take on Hollywood for the third time as the UK hosts of the 2016 Nickelodeon’s Kids’ Choice Awards.

Have you heard the news? @jordbanjo and @realperrikiely have something REALLY exciting to tell you…! #KCA

“We can’t believe we’re going to be the UK hosts for the third time, what an honour!” said Jordan Banjo. “This year’s awards will be huge so we’re going to make sure viewers at home get all the backstage action and don’t miss a thing.”

From Friday 12th February Nickelodeon viewers can catch a weekly web-show every Friday on kca.nick.co.uk with Jordan and Perri direct from their top-secret Kids’ Choice Awards HQ. The boys will discuss nominee news as well as take on some Nickelodeon challenges. This year’s Nickelodeon’s Kids’ Choice Awards categories and nominees will be revealed in the coming weeks with kids able to vote for their favourites online, on Nick Play and via Twitter using the hashtag #KCA.

“We’re really looking forward to getting back on the orange carpet – it’s becoming a home from home now,” said Perri Kiely. “The KCA’s better watch out, we’re back again and who knows what will happen?”

This year, super-sized surprises will take over the Kids’ Choice Awards. Hosted by Country Music superstar and coach on the Emmy winning NBC’s The Voice, Blake Shelton, the awards will honour favourites from the worlds of film, music and television, giving kids a front-row seat to slime, stunts and celebrities. The show will be seen by kids around the globe on Nickelodeon channels in more than 180+ countries and territories.

Pop Scoop was caught up with the duo to chat about their return as hosts and you’ll be able to watch very soon.