Pop Scoop are giving TWO of you the chance to win a pair of tickets to see cheeky chappy Anttix on his headline tour ‘Just Another Pop Tour’.

And the two winners of a pair of tickets to see @OfficialAnttix & Co on tour  are….

With his boyish good looks, soulful harmonies, catchy self-penned tracks combined with his high energy routines this is set to be a night like no other!

With special guests, from Britains Got Talent Jordan O’keefe & Gabz and singer/songwriter Aiden Hancock conformed for Liverpool and Shrewsbury.

It will kick off in London on April 7th before heading across the UK.

The full schedule is as follows: 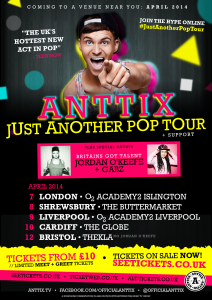 Tickets for the gigs are on sale now.

Follow @pop_scoop to be in with a chance to WIN a pair of tickets to see @OfficialAnttix on Tour http://goo.gl/1wnuKs #AnttixScoopcomp

• There are TWO prizes (the “Prize”) on offer consisting of a pair of tickets to see Anttix on any of the dates and venues of his headline tour ‘Just Another Pop Tour’.