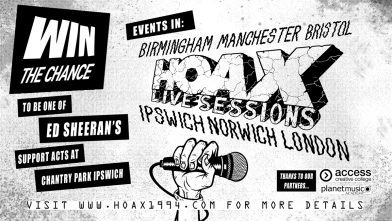 Are you an unsigned band or singer-songwriter?

HOAX Live Sessions 2019 is hosting a six-stop UK music tour with the fantastic opportunity for an unsigned band or artist to open for non-other than Ed Sheeran on the final night of his record-breaking Divide World Tour in Ipswich on Monday, August 26.

The HOAX UK music tour takes place between Thursday, July 11 and Friday, August 16. To be in with a chance to join The Darkness and Brit nominee Lewis Capaldi in warming up the crowds for Ed and compete in this once in a lifetime event, complete and submit the form by visiting HOAX.

Online registry opens Friday, June 14 at 4 p.m. and the deadline for submissions is Friday, June 28. The selected artists/bands will be given the chance to showcase their music in front of music industry professionals. Auditions will be taking place in Birmingham, Ipswich, Bristol, London and Manchester. Check out the venues and dates below.

The top five artists and/or bands will be invited to the final HOAX Live Session which will be held in Norwich on 16th August at Epic Studios. There, a panel of experts including the likes of Cenzo Townshend, Talvin Singh OBE, Jesse Quin and Joe Rubel will select the winning act.

If you’re more of a spectator, you can still join HOAX in watching some of the countries best up and coming bands. Entry to all shows will be free, on a first come first served basis.

HOAX is a contemporary streetwear brand, with roots dating back to 1994, inspired by skate, surf and music. Our products are high quality, hard wearing and hand printed in house here in the UK.