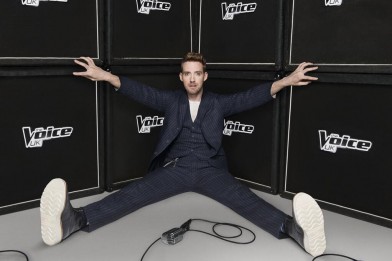 Ricky Wilson is the frontman of British band Kaiser Chiefs. Among their many achievements, Kaiser Chiefs have won three Brit Awards, been nominated for a Mercury Prize, an Ivor Novello Award and have had four Top 10 albums. In 2012 they performed at the Olympic Closing Ceremony in London. Here’s what Ricky has to say about joining The Voice UK.

What was your reaction when you were first offered the role of coach on The Voice?
It happened pretty late in the day, as it was only a few weeks before we went to film. But I threw myself into it all. I have spent the last ten years of my life not making any decisions at all. And then suddenly this thing came along and it felt like a big decision. I am really enjoying it.

So what are you enjoying?
It is incredible watching the contestants’ development. They make each other learn. It’s good to learn stuff and I didn’t think I wanted to learn more but Kylie, Will and Tom have all taught me loads. It has been really inspiring.

What have you learned from them then?
They work really hard. They are all really famous and massive stars but they work long hours. Tom has been great and he has really helped me a lot. He has given me a lot of advice. We went out for a Chinese the other night and it was lovely. It doesn’t feel like there is any competition (between us all). It feels like you want the best for the whole thing.

What kind of coach are you?
As head coach – Tom, Will and Kylie will all agree that I hold the team together. Without me, it would fall apart! I am just kidding!

Do the contestants pull at your heartstrings?
At the time, no they didn’t. It is only when I got back to the hotel and started thinking about everything that you realise it is tough. When you get to know them, learn about their story and you see stuff in them that you recognise in yourself, it can get tough. I had my big break ten years ago but I still recognise their drive and determination.

Are you pleased with your team?
Of course – I think I can win! I know them now and I have a connection with them. Even if they weren’t any good, I would feel the same – but they are good

Would you have done a show like this?
It is an impossible question to answer. I would have done everything. Times have changed and so I don’t know. There was nothing like this back then. But maybe I would have if there were.

Why do you think The Voice is a good show?
It is different. Each stage has got a part to play. I am learning as I go along. I have been a fan of Saturday night TV since I was a kid. You realise how important it all is. It’s a real launch pad for the contestants. At first it is all about the best voice, but then other things start to creep in once you get to the next stage.

Does image play a part?
Yes it does. Image and personality both do. Some people who don’t have as good as voices as others can trounce them in their personality. They look scared and think ‘how can we beat them?’ but they light up the room with their personality. Barbara Streisand has got one of the greatest voices in the world but her personality is so important too.

You have had an incredible career…
I don’t think I have had yet. Ambition does not stop. You can’t turn it off. You just want to get bigger and bigger – there’s no off switch as far as ambition is concerned.

What advice have you been giving your team?
To try to be in the right place at the right time. To do that, you have to be in as many places as many times as you can. You should never sit around waiting for it to bite you.

What has surprised you the most about doing The Voice?
How emotionally attached you get to the people. I thought it was just TV. But it’s real. You do care about them, you care about everybody else’s team and you care about all the coaches.

Summing up, it sounds like it is an interesting experience for you?
Yes definitely. I will look back on it and think it has been crazy and surreal. But that’s what life is about. Everything has to change. I don’t like staying still.

The Voice starts Saturday 11 January at 7:00pm on BBC1