Undisputed pop icon Kylie exploded onto the music scene in 1987. With over 68 million records sold worldwide, ten world tours, successful albums and over 50 hit singles internationally, she is one of the world’s most loved artists. Here’s what the new coach has to say about joining The Voice UK.

What was your reaction when you were offered the role as coach on The Voice?
I watched the first two series and I really got into the show. I did think about it for a while, as it was such a big commitment for me. I have never done anything like this before – but it feels like the right time and now I am doing it, the overall experience has been amazing.

How did you find the blind auditions?
They were really nerve-wracking as to when you should press the button. So many things were going through my mind. Even though Tom has done the show before, he still said it was nerve-wracking, too, because you are still dealing with a fresh batch of people.

What have you enjoyed the most?
I have found it really amazing that the landscape changes all the time. You analyse it and think you have the right answers but then it changes again.

What have you been looking for in the talent?
I thought I would be looking for voices I could relate to but actually, I turned for voices that are nothing to do with me. I was a just a fan of that voice. It has been an amazing experience to hear some of their voices.

Did you find it strange not being able to see them sing?
Definitely and I wish everyone could experience this. It is not as simple as watching it at home! You think it is a guy and then it is a girl. You just don’t know. You form a picture in your mind from your set of life experiences about what the voice says to you, and then you turn around and it is very different. The hardest thing I have found is saying no to people. 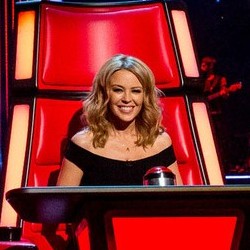 Are you pleased with your team?
Yes I am. Again it is like a horse race. You think one is in front and then someone else overtakes them. Your decision is turned again.

What kind of coach are you?
I am strict if I have to be. I want them to feel they have the support from me. I have been advising them on things that I have learned as a performer like light and shade, delivering the song in a certain way or showing them how to use the stage in a certain way.

What do you expect in return?
I would be disappointed if they didn’t take it seriously. The public want to know they have got someone who is giving it their best shot. This is an amazing opportunity for them all.

Is image important?
Of course it is. You need the whole package. If it were just solely about the voice, then you would not need a stage, hair, make-up or lights. I could just sit in a dark room and I wouldn’t have to get ready!

Will has said it is warmer on the show now you have joined. What do you think?
I feel like I have struck gold with three great guys. It is nice to feel we are all in the same boat and I like having the three of them around with me. It feels like a great team.

Has the competitive spirit in you come out yet?
She has come out already! She has shown her face! I do care about it a lot and even when I go home, I find myself thinking about what is the best thing to do.
What would it mean to you if you won?
It would be the cherry on the top. I actually think, however, it is more about the experience of doing it. It has to be – that is what you are aiming for of course.

What has surprised you the most about doing this show?
How it keeps changing. The stuff happening behind the scenes is really interesting. Sometimes it is incredibly interesting and sometimes it feels close to painful when you have to say no!

Your career speaks for itself but would you have gone on a show like The Voice?
I get asked this all the time but I think as a teenager, I probably would have loved to have gone on it. I think I would have daydreamed about going on it. Would I have made it through? I have no idea. I did make a demo when I was 17. I was already acting by then but I did have the bravery and guts to do that.

And finally, do you feel like you are going on an exciting journey right now with The Voice?
Definitely. It is like a lot of life experience – there are ups and downs. I console myself by reminding myself that the contestants do know the rules of the show and so it can’t be a happy ending for everyone. But hopefully they will learn from it and come back another year.