Following a three-year hiatus, American pop-punk/rock band Fall Out Boy are back with an almighty vengeance, delivering a double-whammy of new material, to the utter delight of fans old and new.

Patrick Stump (lead vocals/guitar), Pete Wentz (bass), Joe Trohman (guitar) and Andy Hurley (drums) originally played in local underground hardcore punk bands before forming Fall Out Boy in 2001. They reached mainstream success with their unique “softcore”/emo sound on second full-length album “From Under the Cork Tree” in 2005, which went double-platinum in the US off the back of massive top-ten singles “Sugar, We’re Goin Down” and “Dance, Dance”.

A wider range of musical styles including orchestral and R&B elements on third album “Infinity on High” (feat. singles “This Ain’t a Scene, It’s an Arms Race” and “Thnks fr th Mmrs”) cemented Fall Out Boy’s status at the top of the pop scene in 2007, debuting at #1 on the Billboard charts and hitting top-five positions worldwide. The band evolved their sound even further on fourth album “Folie à Deux” with a host of different collaborators and producers, and followed this with a live album and a greatest hits compilation. Exhausted by extensive domestic and global touring, Fall Out Boy announced an indefinite hiatus in 2009, in order for band members to pursue solo and side projects.

Now in 2013, Fall Out Boy have returned with a new, refreshed take on their punk roots. Symbolically burning their previous albums at an event in their hometown of Chicago, in order to rise like a phoenix from the ashes, they subsequently released comeback album “Save Rock and Roll” feat. lead single “My Songs Know What You Did in the Dark (Light ‘Em Up)” as well as 8-track hardcore EP “PAX AM Days”. With “Save Rock and Roll” debuting at #1 in the US charts, the band’s re-birth plan has been an obvious success!

Pop Scoop! was able to chat with Fall Out Boy’s Patrick Stump and Joe Trohman at BBC Radio 1’s Teen Awards 2013. They talked about their triumphant return to the music scene, the inherent difficulties of being a band, and the “creative open trajectory” they are now set on. They also offered some salient advice on the trials and tribulations of being a teenager – all with their typical, infectious sense of humour.

Get the latest single from Fall Out Boy  “My Songs Know What You Did in the Dark (Light ‘Em Up)” on iTunes now: 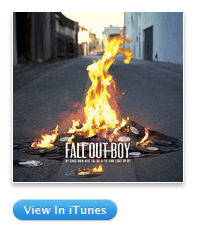