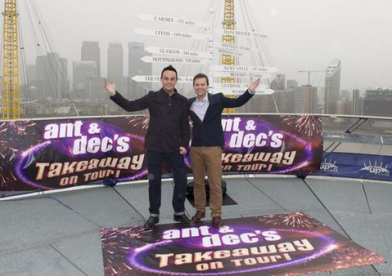 Today from the roof of The O2 and then the British Music Experience; Ant and Dec announced that they will bring their award winning ITV show Ant & Dec’s Saturday Night Takeaway to The O2 on 29 and 30 August 2014.

The show will give people the chance to experience Takeaway live on stage and will be packed with special guests, amazing prizes and of course lots of surprises for the audience.

The show will be a co-production between James Grant Live/Ant & Dec and ITV Studios.  The tour is being promoted by SJM Concerts.

Ant & Dec said: “Takeaway is the one show that people always tell us they’d love to be in the audience for, so we’ve decided to take the show to them.

“Just like the TV show the audience will have a chance of winning some fantastic prizes as well as being an essential part of the show. It’s been an ambition of ours for a long time to go on tour and we can’t wait to hit the road!”

Paul Kanareck, Director of Brands at ITV said:  “We are thrilled to be working with James Grant Live to produce the first ever Ant and Dec Tour. Taking Saturday Night Takeaway on the road will be a real treat for the many millions of fans and viewers of the ITV show, and we are thrilled that ITV’s Brand Extensions team in partnership with James Grant Live will bring this to life next year.”

Rob Ballantine, Director at SJM Concerts said: “We are delighted to announce that the nation’s favourite TV personalities are giving the public the chance they’ve been craving, to experience Ant and Dec live for the very first time. After being entertained in their living rooms by Ant and Dec for many years the public can now enjoy a fully live stage show. It’s sure to be the must see family show of summer 2014.”

Ant & Dec’s Saturday Night Takeaway is produced by ITV Studios and was launched on ITV in 2002. After a break in 2010 the show returned for its 10th series this year to hit ratings and accolade with over 8 million people tuning in each week.

Ant and Dec and their shows have won a staggering 23 National Television Awards (including Most Popular Entertainment Presenters for the last twelve years in a row), six British Comedy Awards, a BAFTA and a variety of other industry accolades. Just recently Ant and Dec won a trio of TV Choice awards including one for Best Entertainment Show for Saturday Night Takeaway.

Tickets go on sale at 9am on Friday 8 November, and can be obtained from www.axs.com.