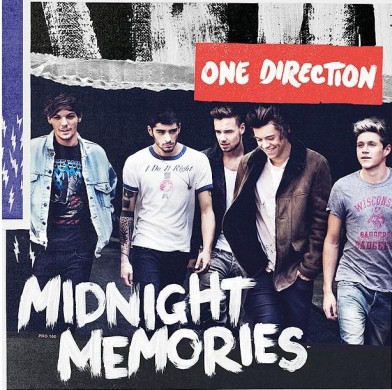 Fifteen years ago today, Amazon.co.uk opened its virtual doors. To mark the occasion, the site reveals the best-selling music, film & TV series, video games and books that have captured the nation’s attention since the first order was placed in 1998.

The products paint a picture of the UK’s cultural consumption over the past fifteen years, and shows we’re a nation that loves Adele, Harry Potter and Mamma Mia!, as well as Rage Against The Machine and Call of Duty.

Fastest selling album of all time – One Direction – Midnight Memories

*Fastest selling based on first day of pre-order sales

“The past 15 years have seen Amazon.co.uk broaden its range of products each year, but entertainment products have always played an integral role in our business,” said Xavier Garambois, Vice-President of EU Retail at Amazon EU S.à.r.l. “It’s fascinating to look back at our biggest sellers – it gives a wonderful picture of the icons of entertainment culture which have defined the UK since 1998.”

The best-selling music artist of all-time on Amazon.co.uk, based on combined CD, vinyl, cassette and MP3 digital download sales, is Adele, with Coldplay in second place and The Beatles in third. Lady Gaga and Rihanna complete the top five, coming in at fourth and fifth respectively, although they sit at first and second place in terms of digital downloads from the Amazon.co.uk MP3 store.

The best-selling albums list is dominated by Adele, with the North London chanteuse taking the top two spots in the all-time list with 21 and 19.

When it comes to singles, Rage Against The Machine’s Killing In The Name Of is the best-selling song of the past fifteen years, helped by the campaign which saw it secure the Christmas number one spot in 2009 through sales of the MP3 download track. Other titles in the top ten show the recent resurgence of the single, with Adele, Psy, Robin Thicke, GOTYE and Daft Punk’s hits from the past two years all featuring. Last year’s X Factor winner James Arthur claims the final top-ten place with Impossible.

“Adele’s achievement in securing both the best-selling artist title and the top two best-selling albums of the past 15 years on Amazon.co.uk is remarkable”, said Paul Firth, Head of Music at Amazon.co.uk Ltd. “The fact that Rage Against The Machine’s Killing In The Name Of has pushed Adele into second place in the best-selling singles chart is indicative of how much the UK loves a good campaign and how the public love the underdog. “

”The appearance of Gangnam Style at number three in the all-time singles chart perhaps shows a future in which the internet makes music tastes more international than ever before.”

When it comes to top-selling titles combining physical books and Kindle purchases, the top ten is dominated by two trilogies, EL James’  50 Shades Trilogy and Stieg Larsson’s Millennium Trilogy. A title from the Harry Potter also makes the top ten, with the final instalment in the epic saga, Harry Potter and the Deathly Hallows sneaking in at number 10.

Elsewhere in the top ten, Suzanne Collins’ The Hunger Games is at number six, doubtless assisted by last year’s blockbuster film adaptation. Yann Martel’s The Life of Pi also benefited from a recent film tie-in, and Europe-wide word-of-mouth hit The Hundred-Year-Old Man Who Climbed Out of the Window and Disappeared features in the Top 10.

In the battle of the heavyweight series, it’s EL James who once again comes out on top – her 50 Shades Trilogy outsold the entire Harry Potter series and Larsson’s Millennium Trilogy, to make it the best-selling book series in Amazon’s history.

“Of all the millions of books customers have purchased in the past 15 years, it’s fascinating to see which have proved most popular with the British public,” said Darren Hardy, Books Manager at Amazon.co.uk Ltd. “Sales of Kindle books have been hugely influential in determining these rankings, with EL James’  sales on Kindle for the 50 Shades Trilogy cementing her place as our most successful author ever.”

One franchise clearly dominates the video games chart, with Activision’s blockbuster Call of Duty series taking the top three spots in the all-time video games chart. This year’s Grand Theft Auto V may well overtake Call of Duty: Modern Warfare 2 at the top of the list as it already takes fourth place after just one month on sale. EA’s FIFA football series is the other big franchise, taking the sixth, seventh and eighth places. Fantasy epic The Elder Scrolls V: Skyrim takes ninth place, and Wii title Zumba Fitness takes the number ten spot, impressive considering it’s the only title in the list which isn’t multiplatform.

“Call of Duty, Grand Theft Auto and FIFA are three of the largest entertainment franchises in the world, so it’s no surprise to see them dominating the top ten best-selling games chart,” said Ketu Patel, Video Games & Software Category Leader at Amazon.co.uk Ltd. “The success of Skyrimsuggests that there is a real appetite for epic fantasy games, whilst Zumba Fitness’s appearance in tenth place shows just how big Nintendo Wii’s fanbase is in the UK.”

ABBA musical Mamma Mia! takes the accolade of Amazon.co.uk’s top-selling DVD of the past fifteen years, with the final film in the Harry Potter series, Harry Potter and the Deathly Hallows Part 2, taking second place. The complete eight-film Potter collection also sneaks into the final place in the top ten list. The Inbetweeners Movie takes the third spot, one of five home-grown productions in the top ten, alongside Sir David Attenborough’s Planet Earth, Downton Abbey – Series 1 and The King’s Speech. Michael McIntyre remains the nation’s favourite comedian, with his 2009 live DVD the only stand-up title in the top ten.

Looking at streaming on LOVEFiLM, Despicable Me is the most popular film of all, with the most streams since 2009. When it comes to TV shows, epic drama Lost takes the crown. Simon Pegg and Nick Frost’s Roswell-themed comedy Paul pulled in the highest number of streams in one 24 hour period.

“The singing may not always have been of the highest quality, but Mamma Mia! really captured the hearts of the UK’s film enthusiasts,” said Zak Watts, DVD Category Leader at Amazon.co.uk Ltd. “It’s no small feat to beat the long-awaited final instalment of the Harry Potter series into second place. It’s also great to see the long-lasting legacy which Sir David Attenborough’s Planet Earth will have on this and future generations of families, with so many UK households having a copy.”