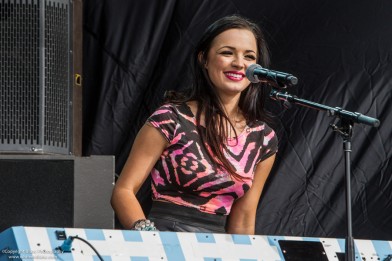 20 year-old female singer-songwriter Tich is the complete pop package. She has the voice, the looks, the song hooks, and a deep emotional connection with her fans. A long career ahead is in the bag, girl!

Tich previously traded under her birth name Rachel Furner, uploading covers of songs onto YouTube and gaining steady success supporting acts such as Pixie Lott, Justin Bieber, JLS and Olly Murs. She was signed by Mercury Records and released a single ‘Sticks & Stones’ in 2010, but a full album unfortunately never materialised.

Rebranded using her childhood nickname and with major Twitter endorsements by James Arthur, The Wanted and One Direction, whose songs she had covered, Tich soft-launched acoustic EP ‘Candlelight’ in late 2012. Since then, she has released her debut single ‘Dumb’, which hit #23 in the UK charts, and second single ‘Obsession’. A third single is due later this year with an album in the works for 2014.

Tich’s sound is shaped by her sweet yet husky alto voice and sparkling keyboard playing, all solidly backed by slick, catchy pop production. While comparisons with other pianist-singers like Tori Amos, Alicia Keys and Vanessa Carlton are deserved, Tich’s cute and unconsciously sultry girl-next-door image, as well as the confessional but still happy-go-lucky nature of her lyrics, are uniquely her own.

Pop Scoop! managed to catch Tich for a few minutes right before her set onstage at Sundown Festival. She spoke about her musical style, the ways in which she writes songs, upcoming plans, her pre-performance nerves, and her distinctive fashion look.

Check out the cool backstage pics of Tich from Sundown Festival 2013 by photographer Neil Burton and Blanc Photography below: