INTERVIEW AND GALLERY: The Vamps 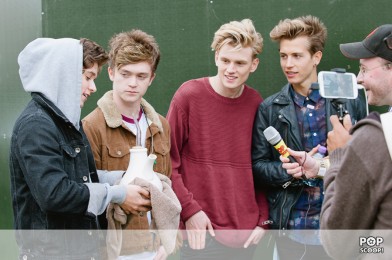 The Vamps are a fast-rising Brit band with an acoustic-driven indie/rock-pop sound. Despite their young ages and obvious good looks, it is important to stress that this is no traditional boy band, but rather a tight group of instrument-playing musicians with a big sound and a no doubt very bright future ahead of them.

Bradley Simpson, James McVey, Connor Ball and Tristan Evans formed the band in early 2012 and quickly started uploading covers of other artists’ songs onto YouTube. Their big break came when they supported McFly on their UK ‘Best Of’ tour in April/May 2013. Since then, they’ve dropped their first original song ‘Wildheart’ on the web and have released the music video for their sunny, hook-laden debut single ‘Can We Dance’ (nearly 1.5 million VEVO views). With the single/EP’s official release due in late September and work on their first album in full swing, their already almost 250k Twitter followers are likely to grow exponentially in number and dedication over the coming months.

Pop Scoop! was lucky enough to nab the boys for a few brief moments straight after their set onstage at Sundown Festival. Initially we only had 3/4 of the band and then Bradley joined in later with his throat-soothing “warming down” gear in tow. They spoke about their musical style and influences, the inspiration for their first music video, and their upcoming gig and promotion plans.

(Note: Be sure to watch our interview with Union J to see The Vamps walking by in the background. Fortunately for all, there was no pop-skirmish!)