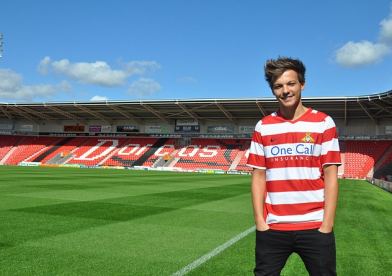 One Direction star Louis Tomlinson fulfils a childhood dream after signing for his home town club Doncaster Rovers, however, the One Direction hunk unlikely to play anything more than a few charity reserve games.

Louis has been given the No 28 shirt. Chairman John Ryan told the club’s official website: “I am honoured to let Louis play in my number to help raise money for the charity. I wore this in 2003 for my record-beating appearance at Hereford and this is the first time I have allowed it to be used since but I felt this was a good cause.”

Doncaster Rovers official Twitter account clarified what the deal meant: “Just to confirm Louis will only play one game for the develop squad to raise funds and awareness for Bluebell Wood & DRFC,”

Adding: “Louis will not be making any money from this, his sole aim is to raise funds and awareness for this charity for which he is a patron.”

Louis said: “This has always been a childhood dream for me. I feel very honoured to have been asked to sign for Rovers and being able to help both the club and the amazing charity Bluebell Wood is what it’s all about.”

He also Tweeted about the signing, Tomlinson wrote: “Amazing day for me, such an honour to be part of @drfc_official ! Who’s gonna come to a game?”

Doncaster manager Paul Dickov said: “He’d better get himself back over here. If he’s signed a contract he’s missed pre-season training already and he’s having a holiday in America so we’d better get him over pretty soon. It’s fantastic he’s a Doncaster supporter because first and foremost it raises the profile of the club. We can get him in September time to do a bit of training, get him involved in a reserve game and the proceeds of that will go to charity.”

Louis, who has previously worked at the Keepmoat ground on match days, will be appearing for the side during the 2013/14 season.