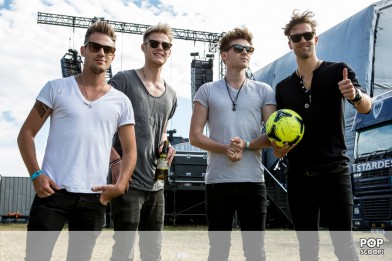 As I finish my interview with the amazing Joywride backstage at Sound Island Festival, I can’t help but notice, to the side of us, Lawson are playing football with The Vamps. Andy from Lawson comes over to say hello and we managed to get a quick chat with the band. It’s a tough job, but someone has to do it!

Lawson consists of Andy Brown (acoustic guitar and lead vocals), Ryan Fletcher (bass guitar), Joel Peat (lead guitar) and Adam Pitts (drums) have come along way over the last few years. The band made its mainstream breakthrough after becoming the support act for The Wanted on their The Behind Bars Tour. Receiving a welcoming reaction got the ball rolling.

Ryan tells us: “We then opened for people like Coldplay, Avril Lavigne and The Script, all good experiences, really great.”

After selling out their own tours, this summer they’ve played loads of major festivals.

Joel tells us: “It’s very different from playing your own shows. People are still discovering us at the festivals, we pick up new fans winning people over. We get amazing feedback on social media from festival audiences.”

“like opening for Bruce Springsteen, it’s not an audience who would have normally come to see us, but we got great feedback from them.” He adds.

The band are well travelled now and can truly be described as a global band touring the USA, Australia, but Asia holds a special fondness for them.

“That was one of the finest moments for us, we arrived in Singapore and saw we were Number one over there and a lot of other Asian countries.” Says Ryan.

They’ve recently repacked their album Chapman Square, “There’s five new songs on the standard version, and three more on the deluxe edition including two live songs, and all the B-sides from the singles,” Adam said.

“It’s pretty much like a new album.” He adds.

In the album, the hit song featuring BOB is included; we talked about that with the guys.
Andy tells us: “The collaboration was born out of a demo of the song we sent to BOB, he’s one of our favourite rappers, he loved the song and was excited to be a part of it, so was great to get him ob board.”

In this song it includes the lyric ‘I was standing in the dark, but now I’m in control,’ a subtle reference to their previous single ‘Standing In The Dark’.

“The reference links old songs with new because we are starting a new chapter with this new version of the album.” Andy continues.

Talking of new chapters, Ryan says: “The new UK tour is really important for us”

Adam continues: “we tour in September but the tour really kicks off in August in America, and we go to a lot of different places so it’s like a half world tour.”

Joel adds: “The stage for this tour is so much bigger, there’s going to be loads of new things.”

Lawson also gladly announced to us that they’ll be playing a gig for the US OPEN, it’ll be held in NYC, on the 24th of August.

Luckily, the band havnt had to endure the negative aspect of fame in the same way as One Direction for example.

Andy tells us: We are more a band than faces, people know so we don’t get too much attention in the streets, it’s like if you walked past coldplay’s drummer, you wouldn’t recognize him even if he’s one of the biggest band on earth.”

Adam laughs: “I got recognised in Pizza Hut though when I was at the self service bar, and posed for a picture.”

Andy remembers: “I was recognised in my local Sainsbury and they took my picture in the store aisle.”

If you want to catch Lawson on their tour, check their website lawsonofficial.com for more info.

Thanks once again to Blanc Photography for the pics: