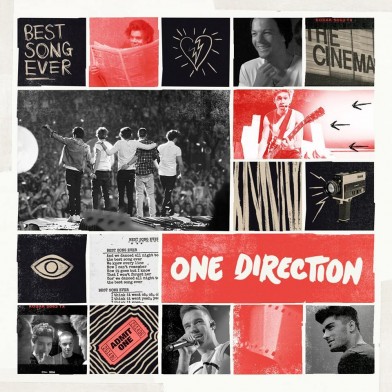 Here it is.  One Direction revealed the cover art for new single ‘Best Song Ever’ and the feedback so far has been good.

Best Song Ever will be the first release from there anticipated third album, due for release this Christmas. The artwork was unvieled on Twitter by the 1D account with the caption: “So you know we MIGHT have mentioned revealing the #BestSongEverCover…? HERE YOU GO! What do you think?! 1DHQ x”

The art is a combination of photo’s of the boys, a snippet of the lyrics to the song and artwork created by fans.  One Direction asked fans to submit artwork for the cover:

Who’s ready for the first challenge!? We want you to design the cover for Best Song Ever! 1DHQ x #3WeeksTill1DMonday http://t.co/TdtDVdq7OI

We love it, what do you think?