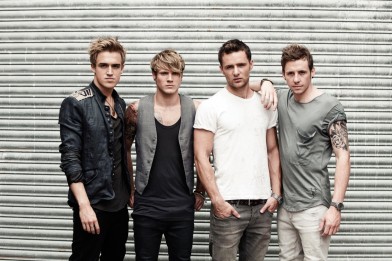 Join In, the London 2012 legacy charity for volunteering and Team London, the volunteering initiative of the Mayor of London, have confirmed that McFly will close the Go Local event, the UK’s biggest celebration of volunteering being held at Queen Elizabeth Olympic Park on the 19th July.

Go Local, Presented by BT, is hosted by Join In, and Team London, and is majority funded by the Big Lottery Fund, with additional funding from government grant and BT.

With fifteen consecutive top ten singles in the UK, seven of which were Number Ones, the announcement that McFly will be at Go Local comes off the back of news that the multi-award-winning band have just sold out four dates at the Royal Albert Hall later this summer.

Joining McFly will be comedian and Join In Patron Eddie Izzard, who will perform a special Olympic-themed set and Ivor Novello award-winning band The Feeling who have stormed the UK charts with several Top 10 hits and performed to a packed audience in Hyde Park at BT London Live last summer.

The Pandemonium Drummers, who wowed the world with their performance at the Olympic Opening Ceremony, are set to get the show off to a rousing start, whilst the Games Maker Choir will help to evoke the team spirit, excitement and unity that captured the imagination of the UK last summer.

Other star acts on the billing include: Spelbound, BOND Quartet, The James Riley Band, Robbie Boyd and Greatest Hits of the West End, with more acts yet to be announced.

Sebastian Coe, the Mayor of London and London 2012 medallists and sporting heroes will also feature, inspiring the crowds, recognising the valuable contribution that volunteers make and inspiring more people to get involved.

As well as live performances, Go Local will provide ideas and practical advice on how people interested in volunteering can make a real impact in their local community, whether or not they were involved in the Games.

The event is a curtain raiser to a summer of activities being delivered by Join In to build on the enthusiasm for volunteering in the UK as a result of the Games. Over the summer, Join In will play matchmaker to local clubs and community groups and potential volunteers by offering them opportunities to do something great in their local community.

People can buy up to four tickets, to encourage volunteers to spread the word among their friends. A pair of tickets costs £15 available from www.ticketmaster.co.uk/go-local.