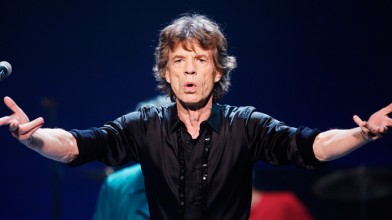 The Rolling Stones’ frontman Mick Jagger has spoken to the John Humphrys on the Today programme on BBC Radio 4 ahead of his Saturday night headline set at this year’s Glastonbury festival.

The full interview can be heard on BBC Radio 4’s Today programme’s Glastonbury special on Saturday 29th June, 2013 from 7am. You can read the full transcript below:

John Humphrys: Can I call you Mick?

JH: The first concert I ever saw you in was Madison Square Gardens.

JH: That’s it, you got it.  And the next time I’m going to see you is in Glastonbury on Saturday night.

MJ: Probably quite a few of the same numbers.

JH: You’ll do the golden oldies won’t you?

MJ: Ah, I’m not saying what we’re doing at Glastonbury.  I can’t tell you the set list for Glastonbury.

MJ: Well, it’s nice to have a bit of a surprise but people usually nick the set list somehow as it goes out on an email somewhere and someone takes a picture of it or something like that.

JH: Well you’ve got to do Satisfaction.

JH: So long as it’s Satisfaction or Brown Sugar I can live with that.

MH: Ok, so we’ll put those in the notebook and when I put my pins in the numbers I’ll eh…

JH: I appreciate that.  Look, how much has rock ‘n’ roll changed? I know that’s an enormous question but from the day you started 50 years ago and then it was, it was about rebellion really wasn’t it? You were the rebellious youth.

MJ: Well, yea but it wasn’t only about lyrics, I mean, it was about.

MJ: Yes exactly, so rock ‘n’ roll from the very inception, before we came along even, was all about looking a bit odd and dressing up in extreme ways and so on.

JH: Yea and wearing a dress in Hyde Park.

MJ: Wearing a dress in Hyde Park, and we kind of carried on that tradition, there were obviously deviations from what people took as social normality and so on but I think in the entertainment business there’s always been that but that really took hold in that 60’s period. It had been shocking in the 50’s period.  I mean Elvis was very shocking to people, it’s hard to believe now looking back on it but Elvis was totally shocking.

JH: But not as shocking as you?

MJ: I think possibly he was actually.  Because if you lived, if you saw, perhaps, I don’t know when you first went to middle America, but middle America was still living in the Eisenhower era and so in 1955 that was shocking behaviour.

JH: So were you playing up to that then? Were you taking the mickey out of us?.

MJ: I think it was taking the mickey and I think the papers loved it and they used to, you know,  print silly stories playing it up. I don’t think that people were really shocked.

JH: You’re going to destroy all my illusions now aren’t you?

MJ: How can you be shocked by it, you know.  There were stories about that you didn’t go into restaurants without a tie on…

JH: You did a bit more than that.

MJ: We did a lot more than that but if you go back and look at those cuttings there was a lot of that, you know, a lot of outrage.

JH: Well the national hairdressers federation got cross, I do remember that.

MJ: Yes exactly.  I mean how stupid is that?  All of that is nonsensical. But of course there were actual, apart from all the silliness on top, there were actual social changes going on in all that time which we all know about, and there’s books and sociologists, anthropologists have written about and we’re not going to bore everyone by repeating them some people thought the general tones and moral standards were changing, because they were changing very very fast.

JH: And a lot of people blamed you for that.

MJ: Yea, they blamed a lot of things but of course we were only one of the many things that were going on.

JH: Sure, but don’t forget, well as if you would forget, that it was Tom Wolf who said, wasn’t it, “The Beatles want to hold your hand and the Stones want to burn your town”.

MJ: Well, that was very good Tom, well done. Only a novelist would come out with these things.

JH: Did you no harm did it.

MJ: Outside of England it was far worse than in England because there was so much social unrest in Europe, for instance, Germany, Holland, France and Italy, these Rolling Stone concerts became a kind of excuse, or focal point for just general unrest, much, much worse than the hairdressers federation, you can see the tameness of it all.

MJ: We were part of it just naturally we were just part of the….

JH: You didn’t set out to say I’m going to be the bad boy.

MJ: No, we just set out to be a blues band and just behaved as we always had and like kids always behave.

JH: But you’re a middle class boy, I mean you were a nice boy.

MJ: It doesn’t mean to say…we were very well behaved in a lot of ways and in other ways we were quite annoyed and represented a lot of frustrations of that particular class of people. I  mean that people that rebelled and marched in the streets in Brazil recently have been a lot of middle class people.

MJ: So, you know, just because we were relatively middle class or whatever you want to call us, doesn’t mean to say we didn’t have ideas about society but our main thing was that we were a blues band and wanted to play music but we were sort of side tracked into this social thing by the mood of the times and of the times themselves which were galloping on.

JH: Your part of the music scene is tamer now than it was.

MJ: You mean classic rock?  But the last song that I wrote that I put out called Doom and Gloom is actually mostly social comment……It’s very tongue in cheek social comment but it’s still social comment.

JH: Satisfaction was tongue in cheek?

JH: Well, it says in effect I can get no Satisfaction because of what’s going on around.

MJ: I’d say it’s very tongue in cheek and very humorous, as Doom and Gloom is also humorous.  It’s all cut with humour which is part of the English way of doing things.

JH: So were we were always wrong, not me because we’re of an age and therefore you represented something for me I mean, you realise you’re destroying all my illusions now because you were that guy up there who was speaking for all of us…

MJ: Well I was speaking but if you read the lyrics it was humorous, it wasn’t like just simply frustration.

JH: But it was your demeanour wasn’t it? It was the way you came on stage and…

MJ: Well it depends on how you carry yourself. If you’re menacing when you’re doing it then you can smile…

JH: That’s the word. You were menacing.

MJ: Part of the Rolling Stones, not only when we started out but throughout, some of it is menacing but you’re not menacing for 2 hours you’re menacing for 10 minutes and then you’re smiling and romantic and so you’re not. We wrote tunes and had hits with songs like As Tears Go By, it wasn’t particularly menacing.  The whole thing about the Rolling Stones is that they’re not just one thing, they’re not just in one box.  The Rolling Stones would pride themselves in the fact that they can do one kind of thing, and turn their hand to something else perhaps, you know, maybe some with more success than others but we like to try our hand at lots of different things.

JH: And how much longer can you go on doing that?

MJ: I’ve no idea.  It’s a bit like asking how long you’re gonna broadcast the Today Show for.

JH: Look, I’ll tell you the honest answer in my case, it’s as long as they’ll have me.

MJ: Well probably the same, I’ll give you the same answer.

JH: Well, based on present performance it will be a long time. But the difference is, the Today Show, I sit there and you know, well I sit there, that’s it and I ask questions of politicians and I know pretty much what they’re going to say…

MJ: You still have to have a sharp brain I should think otherwise…

JH: But I haven’t got to run the equivalent of what, 12 miles when you’re on stage?.

JH: But you do. I mean, that’s it, you’re bouncing up and down like when I saw you in Madison Square Gardens.

JH: But you must be absolutely knackered.

JH: You’re a rock icon, whether you like it or not. And you have been for a long time and that’s been your life. Is there a moment when you say to yourself, god I wish I’d done something else? I wish in a way I’d had more control of my life because I imagine doing what you’ve done has left you, although it’s just about everyone’s dream, it’s left you with very few choices, the path of your life has been decided for you, I mean you set out to do it….

JH: But you’re not in control are you?

MJ: You are very much in control.

MJ:  Absolutely.  You’re in control and do what you want, work when you want, in that way you’re in control of your own destiny. I mean, do you wish that you’d done something else, I’m sure that everyone wishes they’d have done, could have tried to have been a you know, I’d have been a dancer if anything, yeah but so many injuries.

JH: But a school teacher, you mentioned it.

MJ: Well, a school teacher would have been very gratifying I’m sure, you know, there’s millions of things that you would have loved to have done, a politician, a journalist, I thought of being a journalist once.

MJ: Yea, all these things that you think of when you’re a teenager you could think well I would have liked to have done that, but that’s completely pointless. But I mean, I don’t feel frustrated for lack of control at all and I’m very pleased with you know what I’ve done. Obviously you would have liked to have done, everyone wants to have done more things in their lives. But it’s a slightly intellectually, undemanding thing to do being a rock singer but you know you make the best of it.

JH: But you’ve enjoyed it.

JH: And you’re not going to tell me how much longer you’re going to carry on?

JH: I won’t ask that question ever again.  Sir Mick Jagger, thank you very much.