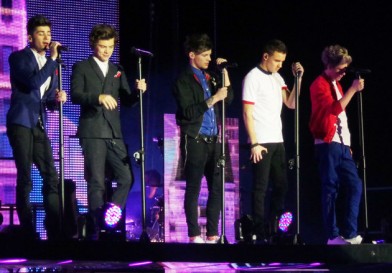 One Direction have beaten the likes of The Rolling Stones and Coldplay to take the crown as’ Best Live Act’ at the Nordoff Robbins O2 Silver Clef Awards.

The boys were given the news ahead of the ceremony tonight and saw off competition from a number of high profile artist that included  include The Kinks rocker Ray Davies, singer Jessie Ware, Coldplay, Barry Gibb, Labrinth and Alison Moyet to win the public vote.

One Direction are currently in America as part of their sell-out Arena Tour so are unable to pick up the prize in person.

Harry Styles commented on the news saying: “Thanks to everyone who voted for us to win the Nordoff Robbins Best Live Act 2013. We are over the moon. Congratulations to Nordoff Robbins on another amazing Silver Clef Awards. What an incredible charity, helping people with music therapy.”