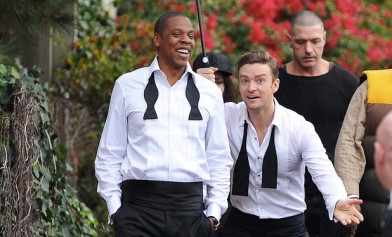 Justin Timberlake was joined by Jay-Z during his performance of ‘Suit & Tie’ at a star-studded pre-Super Bowl bash for charity in New Orleans on Saturday night. The 32-year-old singer’s first concert in five years

JT performed his new hit ‘Suit & Tie’ with collaborator Jay-Z, as well as other material including ‘Pusher Love Girl’ and ‘That Girl’ from his upcoming third album.

A source told the Daily Mail that the new material from ‘The 20/20 Experience’, which will be released next month, was well received by the star-studded invite-only audience, which included Paul McCartney and his third wife, Nancy Shevell, ‘Twilight Saga’ star Peter Facinelli, ‘Modern Family’ actress Sofia Vergara, ‘Nashville’ star Hayden Panettiere and David Arquette.

Justin also performed some classic song including  his Grammy Award-winning track’Cry Me A River’ which was written about ex-girlfriend Britney Spears.

He told the crowd: “Sometimes in life, you think you found the one. But then one day you find out, that she is just some b***h”.

Britney cheating on Justin back in 2002.

The ‘Like I Love You’ singer will take the stage again on February 10 when he performs at the 2013 Grammy Awards and will perform his first official comeback concert at the Hollywood Palladium later that night, tickets for which sold out in a matter of minutes.

Jay-Z is performing with his wife Beyonce today, who is providing the entertainment at the Super Bowl XLVII halftime show.

Timberlake is set to perform at the BRIT Awards at the O2 Arena on February 20.