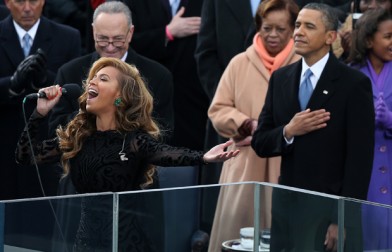 The United States Marine Corps band, which played throughout the ceremony of Obama’s inauguration, has revealed that Beyoncé  mimed the singing of The Star-Spangled Banner.

A US Marine Band spokeswoman – quoted by the The New York Times – said a version of the national anthem pre-recorded with her the day before would be used.

“All music (for inaugural ceremonies) is prerecorded as a matter of course, and that’s something we’ve done for years and years.”

“The Marine band did perform live throughout the ceremony but we received last-minute word that Beyoncé wanted to use the recording.”