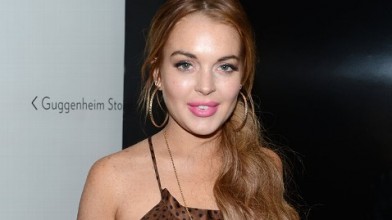 Lindsay Lohan’s trip to London on New Year’s Eve quickly spread into rumours of her entering the Big Brother house tonight. However, it seems the ‘Liz & Dick’ actress’ flying visit was due to the Brunei’s Prince Azim reportedly giving Lindsay Lohan a $100,000 paycheck to show up at his lavish New Year’s Eve party at the Dorchester hotel.

The actress is struggling to pay off her tax debts and has reportedly been evicted from her $8,000-a-month mansion, so she jumped at the generous offer by Brunei’s Prince Haji Abdul Azim – who is third in line to the throne of the Southeast Asian nation.

A source told the New York Daily News newspaper: “Prince Azim not only flew her out; he put her up in a beautiful suite in the Dorchester for the weekend and following the party. Her mom, Dina, is also in London with her at the hotel and attended the party.”

Prince Azim is known for his extravagant bashes, and his New Year’s celebration is particularly infamous. Held annually in the 10,300-square-foot ballroom at the posh hotel in Mayfair, guests’ gift bags are filled with diamonds and expensive hi-tech gadgets.

The insider added: “He rents the ballroom and pays stars to show up for his amusement. Lindsay went because she’s that desperate for a paycheque.”

Lindsay’s father Michael wasn’t impressed when he heard the news, and commented to Confidenti@l: “Now she’s getting paid for dates?”