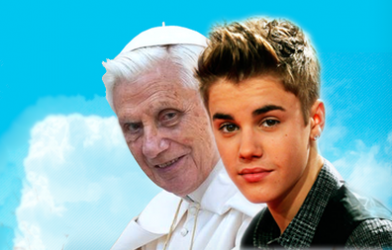 Pope Benedict has beaten out Justin Bieber to set a percentage record for retweeting by his followers, the Vatican claim.

As of noon Italian time on Thursday the pope had 2.1 million followers on his eight-day-old Twitter account.Although Bieber has roughly 15 times as many followers – 31.7 million – the Vatican newspaper said Benedict had beaten Bieber on retweets.

The article claims that the pope’s account is “exceeding pop stars like Justin Bieber in the percentage and number of retweets of his messages,” citing 1.2 million retweets of @pontifex’s first tweet from over 2 million followers.