Only a couple of hours after landing in Los Angeles with One Direction, Harry Styles decides he needed another tattoo… This time accompanied by his girlfriend Taylor Swift.

Harry went to the Shamrock Tattoo Parlour in Los Angeles, California, a favourite haunt of David Beckham, to have the inking of large ship design on his upper arm.

Harry and Taylor pose with the Tattoo artists

It may be a coincidence but in Taylor Swift’s video for ‘I Knew You Were Trouble’, her love interest played by Reeve Carney has a very similar tattoo. 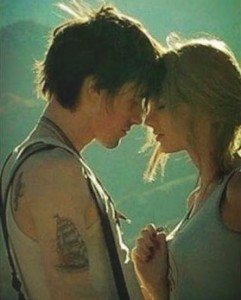 Harry and Taylor pose with the Tattoo artists