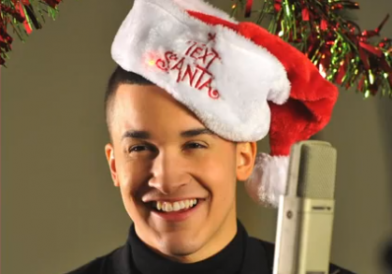 A host of festive celebrities have pulled on their onesies and Santa hats to create a very unique Christmas music video for Asda’s Text Santa charity campaign. The celebrities donned the Text Santa hats, available exclusively from Asda, in support of the music video, which will see Asda donate £10,000 to Text Santa for every 100,000 views of the video on its YouTube channel – YouTube.com/Asda.

Fresh from the X Factor whirlwind, Jahmene commented: “I’ve been so blessed with all the support I’ve had from everyone during the X Factor competition and I really wanted to give something back this Christmas. Text Santa is raising awareness and funds for great causes and to support, all you need to do is head to Asda and buy a Text Santa hat to donate to the amazing charities that will benefit.”

Stooshe got together to lend their support to Text Santa whilst on tour, Pudsey got into the Christmas spirit modelling the Text Santa pet hat whilst dancing with owner Ashleigh and TOWIE stars Lydia Bright and mum Debbie looked glamorous as ever in a leopard print onesie and Text Santa hat whilst giving their best Slade rendition for the video.

As the official retail partner, Asda is supporting Text Santa for a second year with a range of limited edition Text Santa hats and celebrity Sketch Santa Christmas cards, on sale now. The range of hats consists of a traditional Santa hat, a fun-size version for children, a flashing design set to light up any Christmas party, and even one for dogs. A percentage of proceeds from each hat sale goes straight to Text Santa to help people most vulnerable this Christmas. The Sketch Santa Christmas cards have been designed by Gary Barlow, The Saturdays, Tulisa, Matthew Wolfenden, Aled Jones and Lorraine Kelly and at least 50p from each pack of Sketch Santa cards sold will be donated to Text Santa charities.
The official Text Santa hats and Sketch Santa celebrity cards are available in Asda stores nationwide. The hats are priced at just £1 (15-33p donation made to Text Santa) for adults, kids and dogs and £2 for the flashing design (72p donation made to Text Santa). The packs of Text Santa charity cards are priced at £2.