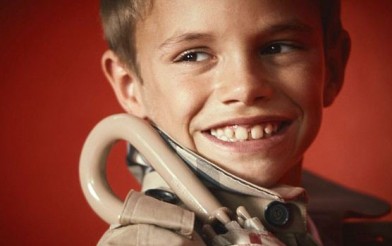 Victoria and David Beckham’s 10-year-old son Romeo has been signed by Burberry for its spring/summer 2013 campaign.

Romeo stars alongside Cara Delevigne, Charlie France and Edie Campbell in the new global campaign and has been praised as a “joy to work with”.

Chief creative officer Christopher Bailey said: “This season’s campaign lights up with the infectious energy of an amazing young cast of old and new Burberry family. We had such fun shooting the campaign and I think that comes through in the images, which really reflect the upbeat spirit of the collection.”

The campaign was shot by Mario Testino and features a mixture of Burberry Prorsum, Burberry London and Burberry Brit clothing.

Beckham Junior is said to follow in his mother’s famous footsteps with a passion for fashion and has already accompanied Victoria Beckham on shoots, counting a host of top designers as friends.
He is said to love good clothes and has a unique sense of style.

Victoria recently spoke about Romeo’s love of fashion. She said: “I think that my middle son thinks that he is going to take over. Romeo likes to get involved, he likes to go out in a suit with a bowler hat. He’s a real fashion lover.”