The Wanted singer was spotted wearing a homemade ‘Free Lindsay’ t-shirt on stage during the group’s concert in New York just hours after she was charged with assaulting Tiffany Mitchell during a bar fight over his bandmate Max George.

The 22-year-old star wore the statement top printed in pink block letters over with an image of a smiling woman throughout the band’s warm up performance for Justin Bieber at Madison Square Garden last night (29.11.12). 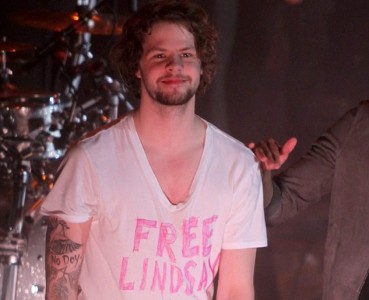 The ‘Mean Girls’ actress was taken into custody in the early hours of Thursday morning and booked for misdemeanour assault after spending the evening with Max, Jay and their fellow bandmate Tom Parker, 24, at Avenue night club after their concert earlier that night.

Lindsay had set her sights on hooking up with Max, 24, and reportedly became “enraged” when she saw 28-year-old fortune teller Tiffany talking to him.

An onlooker said: “The four of them – along with a friend of Lilo’s (Lindsay Lohan) – were drinking before heading off to Avenue club together.

“Come 4am, Lilo seemed quite drunk and you could see it was turning Max off. He then began talking to another woman, which is believed to have enraged Lindsay.”

But the ‘Liz and Dick’ star’s attorney Mark Heller has disputed reports she was under the influence of alcohol and drugs.

He told E! News: “I can tell you when I was with her this morning, she was in great condition. She was certainly not intoxicated, certainly not under the influence of drugs. She was clear [and] lucid, her eyes were clear. No alcohol involvement whatsoever on this occasion.”

The 26-year-old actress, who received further support from Demi Lovato on Twitter earlier today (30.11.12), was also formally charged with lying to the police over her car accident in June just hours after the night club arrest.