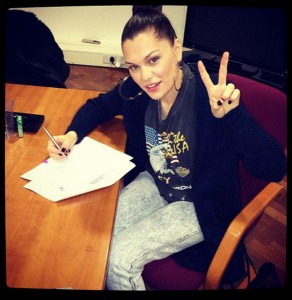 Jessie J has made it official by sharing a photo on Twitter of her signing on the dotted line earlier yesterday for the new series of The Voice.

Last Month, the BBC confirmed that Jessie, along with her fellow judges Sir Tom Jones, Danny O’Donoghue and Will.i.am, would be returning for the second series.

She must have looked back at the picture she posted and had thoughts about her look, she tweeted: “I think I want dark hair again.. Brown hair is kinda boring on me :s”

Before deciding one hour later: “Right I’m going back to dark hair :)”