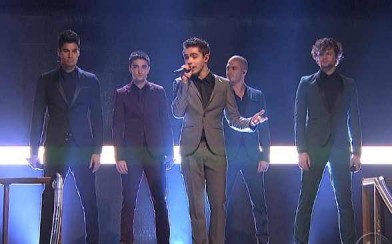 The Wanted got suited and booted for ‘Dancing With the Stars’ on Tuesday night, leaving their fans screaming with joy as they performed their hits ‘I Found You’ and ‘Glad You Came’.

The boys, who also received a standing ovation at the AMA’s, joined their girlfriends for a romantic dinner after their DWTS performance.

Tom took girlfriend Kelsey Hardwick hand in hand while Siva led long-term girlfriend Nareesha McCaffrey into the restaurant. Jay McGuinnes was accompanied to dinner by a mystery lady but Nathan Sykes and Max George were not seen.

WATCH The Wanted performing on Dancing With the Stars.