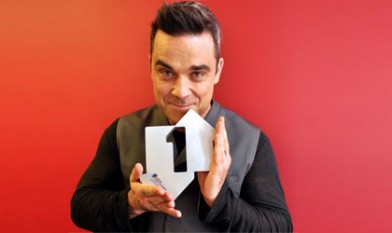 Robbie Williams has done it again. The pop superstar’s new album ‘Take The Crown’ becomes his tenth Number 1 album in fifteen years as a solo artist.
The single from the album ‘Candy’ last week topped the singles chart, becoming the third fastest selling single of 2012 after its release on October 28.

Having stormed to the top of the Official Singles Chart with Candy last week, Robbie Williams scores a second career Official Charts double this week as Candy holds on to the top spot, whilst new album Take The Crown becomes his tenth Number 1 album in fifteen years as a solo artist.

Last week, Robbie told OfficialCharts.com: “Number 1 – YEAH! So chuffed, really, really happy that Candy reached the top spot. Good work Team Williams and thanks to everyone who got it there. I’m so excited about this album”

The last artist to secure the Official Charts double was Rihanna, who held the top spot on both the singles and albums chart in November last year with ‘We Found Love’ and ‘Talk That Talk’.