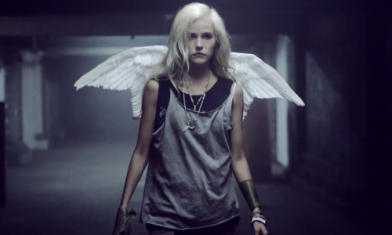 Ed Sheeran has released the official music video to his next single, ‘Give Me Love’. This is the final single to be taken from his multi-platinum ‘+’, his debut album.

The video shows former Home & Away actress Isabel Lucas wondering through the city streets as cupid (with wings and all). She wreaks a little havoc along the way shooting at people with her arrows, making them fall in love.

Ed is seen sitting in a cafe at one point with cupid looking on.

The singer/songwriter unveiled the new promo via Twitter, saying: “This is the final video and single from my album, it’s been an awesome journey so far #givemelovevideo”
‘The actress is the video is the amazing Isabel Lucas, hope you all enjoy it x”

Watch the music video for Ed Sheeran’s new song ‘Give Me Love’ below:

What did you think of the video? Tell us in the comments below or tweet @Pop_Scoop!