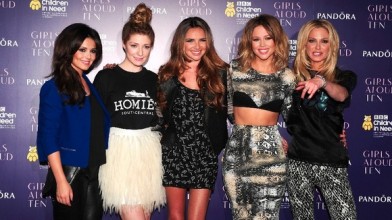 The BBC have announce the line-up for this years Children in Need show… And it’s going to be a BIG-UN.

The star-studded event will feature music performances from One Direction who kick off the evening, plus Little Mix, Susan Boyle, Leona Lewis, The Script, Paloma Faith, Il Divo and Tim Minchin.

Newly-reformed Girls Aloud will give an exclusive first TV performance of their much anticipated new single Something New’.

Strictly Come Dancing fans will be pleased to see old favourites Ann Widdecombe and Russell Grant returning to the dance floor for the event, alongside their dance partners Anton Du Beke and Flavia Cacace.

Britain’s Got Talent 2012 winner Pudsey the dog will finally meet his namesake, Children in Need’s own Pudsey bear, for an exclusive dance performance extravaganza.

Around 20 of Britain’s Olympic and Paralympic heroes including Tom Daley, Rebecca Adlington, Louis Smith, David Weir, Nicola Adams and Ellie Simmonds will be throwing shapes in their very own music video set to Basement Jaxx’s ‘Do Your Thing’ – including a special section featuring Zara Phillips and her 3 Day Eventing teammates dancing the ‘Gangnam Style’.

And if that’s not enough… Pop icon Kylie Minogue will perform re-workings of some of her classic hits accompanied by the BBC Concert Orchestra, filmed at Proms in the Park in Hyde Park earlier this year.

Girls Aloud said: “It’s a huge privilege for us to perform the Children in Need official single this year and we’re really looking forward to making our first TV performance of ‘Something New’ on Appeal night. The charity has always meant a lot to us and we hope to raise as much money from the single as possible!”

One Direction added: “It’s an honour to open BBC Children in Need’s Appeal show again this year and we are so excited about performing on the big night. Children in Need is such an important cause, one which we are always thrilled to support.”

Sir Terry Wogan will be joined by Fearne Cotton, Tess Daly and Nick Grimshaw to present the evening and help to raise money for disadvantaged children around the world.Children in Need airs on Friday, 16 November.