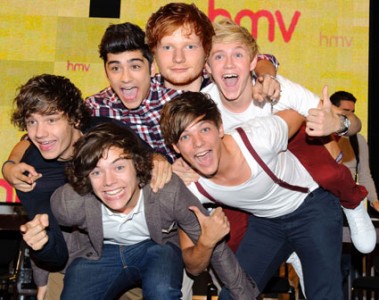 The ‘Lego House’ star admitted the track contains some of his favourite ever lyrics, and he recalls how the once-forgotten song to light.

“The great thing about it is I wrote that song with a girl called Fiona Bevan when I was 17 and we lost the song,” he admitted. “I’ve kept in touch with Fiona, we’ve done gigs and stuff and about two months ago she sent me the tune and was like ‘oh, do you remember this?’.

“I was like ‘Yeh, I do remember that’, and I was in the studio with the One Direction boys at the time and I was playing it and they were like ‘we really like that’.”

“It was one of five songs that I gave to them which made the album. There’s another one on their as well,” he continued. “I think they just wanted to try something different. I think they did the same formula with the last single – it sounded like a One Direction song – and now I think they want to switch it up a bit.”

“It’s got one of my favourite lines that I’ve ever written in a song,” he confessed. “Harry says, ‘I know you never like the sound of your voice on tape and you never like to know how much you weigh and you still have to squeeze into your jeans but you’re perfect to me’.”

One Direction debuted the artwork for the track last week (see below).