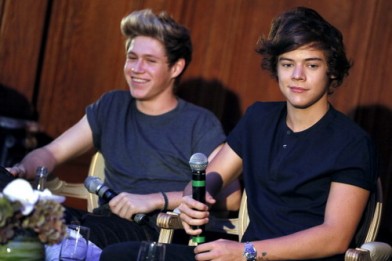 One Direction delighting French fans today after spending the day in Paris promoting their new single ‘Live While We’re Young’.

Fans around the rest of the world were kept up-to-date with the news from across the Channel with the lads tweeting about their trip.

Niall Horan tweeted: “Just did a press conference in paris ! Goin to be a good day here! #1DinParis”

He then added: “Loving paris today! What a beautiful city!”

Louis Tomlinson wrote: “So good to be back in Paris!!! C’est fantastique!”

Liam Payne also Tweeted: “What a beautiful day in Paris so far! Thanks to all the fans outsideeeee”

Their trip included an interview with major French TV show ‘Le Grand Journal’, due to air on Monday at 7:30 (UK time)”. Hundreds of screaming French Directioners lined the streets outside the TV studio, desperately trying to catch a glimpse of the boys but many were left dissapointed.

Niall once again took to Twitter to say goodbye and apologise for the rush, he said: “France u have been amazing! Sorry we couldn’t stop to say bye outside. Had to rush to airport. Thank you all so much for coming. Au Revoir”.