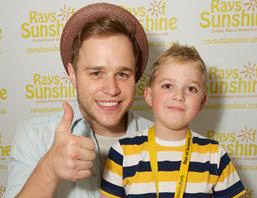 Olly is keeping his feet firmly on the ground by supporting Rays of Sunshine and meeting deserving wish children. Most recently Olly took time out of his busy schedule to meet Jack, Jordan and Kelsie, three very special children whose greatest wishes were to meet him. Cheeky Jack in particular got on well with Olly, both pulling funny faces to the camera and telling jokes!

“I am very honoured to announce my involvement as Ambassador for Rays of Sunshine. I have thoroughly enjoyed meeting the amazing wish children they work with and am looking forward to meeting many more!”

Rays of Sunshine Children’s Charity was formed in 2004 to help children who are living with serious or life-limiting illnesses between the ages of 3-18, across the United Kingdom.